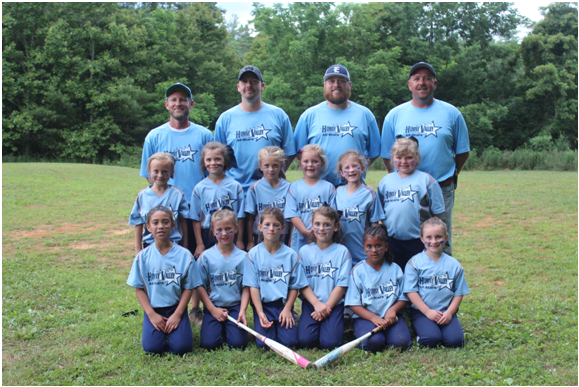 The Hominy Valley 6U All Star Team won the North Carolina State Championship in the Babe Ruth League State Softball 6U tournament in Clemmons, N.C. last weekend.  This team is comprised of 13 girls from the Enka-Candler area who were selected to represent their recreational softball teams this Spring from the Hominy Valley Recreational League.

Coached by volunteer coach, Adam Hamlin, the Hominy Valley 6U All Star team has had an undefeated season.  They swept the Fairview Invitational in four games the week of June 13, 2016.  They scored 104 runs, and only had 47 runs scored against them.   They followed up by sweeping their District Tournament at Erwin the week of June 20, 2016, scoring a total of 61 runs  in three games with only 25 scored against them.

Coach Hamlin said, “the number one goal with girls this age is to have fun, and to try to teach fundamentals while you’re at it.  I am so proud of these girls and their dedication to playing as a team. I started each practice and game with the importance of teamwork, and they played every game like a team.  I think it paid off. You know the best part of coaching?  Almost after every game, at least one girl would ask whether we won.  The fact that they were having so much fun is why we do this.”

Catcher, Savannah Frisbee said, “we are undefeatable,” while casting a grin from ear to ear.  Parent, Tony Dezio said “I am happy our daughter was involved in this program.  I never thought this was possible when we signed up at Hominy Valley Recreational Park in February.  I give credit to the dedication of the coaches, the leadership of the parents and the passion to the game of our daughters.”

Beneath the surface of their wins, is the concern for a fellow teammate, Mya Grace Phillips.  Mya Grace has been battling cancer. She was unable to join her team on the field this year, but that didn’t stop her from rooting for her friends during the championship game.  Within minutes of the win, Mya and her teammates exchanged video messages of pride and joy.  These girls have dedicated their season, their prayers and the win to their friend, Mya.